Aside from being a meditative practice good for the mind and soul, yoga is an equally highly physical activity. Asanas are carried out as a means of improving the body’s capability of sitting in long poses of concentration. The strength and flexibility that are gradually built overtime make the body more enduring and open to higher levels of meditation. Through each movement, a yogi also develops a heightened sense of awareness of their body and a deeper understanding of themselves.

In Patanjali’s yoga sutra 3.30 he says, “By samyama on the navel centre, knowledge of the arrangement of the systems of the body can be known.” Quite literally, many take the wise sage’s words to mean focusing on the navel region and strengthening it. By doing so, Shape Magazine explains that building core strength is just like laying the foundations of a house. It’s intricately connected to the major muscular regions of the body and acts as a baseline fitness for most of the movements that you do. You can’t fly into a crow pose or flip into a handstand without having stability in your midsection.

The core also plays an important role in the different planes of movement which are sagittal (forward and backward), coronal (left and right), and transverse (rotational). Yoga Journal states that these three anatomical planes teach a person the ways the body can move, as well as signal the imbalances in the body which is really important for creating body awareness. When you mirror Utthita Trikonasana (Triangle Pose), which moves along the coronal plane, you might find that one side is more stable or more flexible than the other. This information tells you to make a more conscious effort of building up the weaker side of your body so you can ultimately introduce more balance. People tend to favour practicing on their dominant side. Knowing where you move in space also keeps you centred and prevents running the risk of injuries.

That being said, body awareness doesn’t just apply to your own. Michelle Bartolo Yoga previously mentioned that teachers must practice what they preach. They need to develop their own personal practice in order to effectively teach their understanding to the class. Part of an instructor’s training is to adjust their students which will not be possible if one does not have a proper understanding of the body’s capabilities. It is not good custom for a teacher to force your arm into a twist if your face is already showing signs of extreme discomfort. 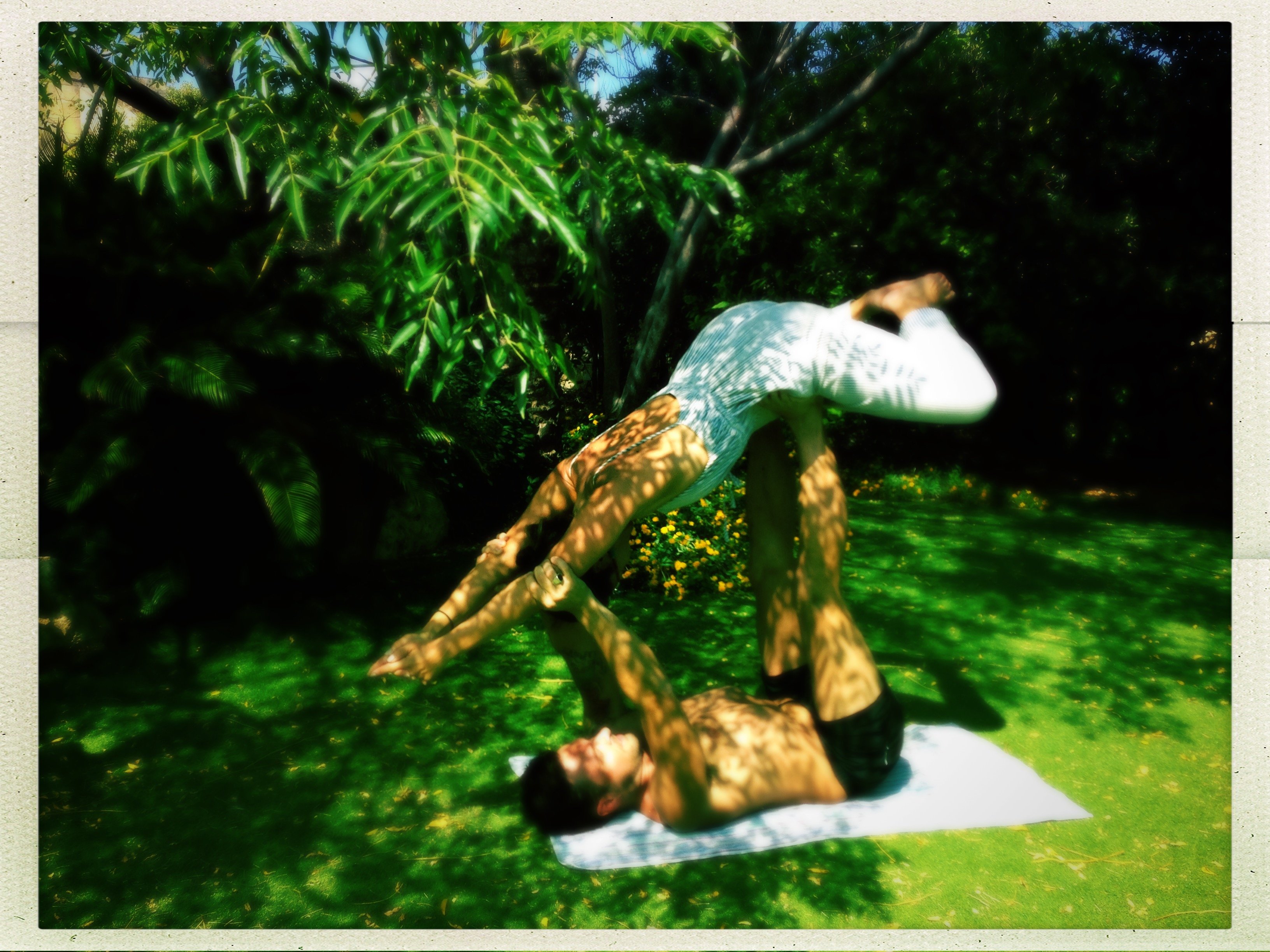 The same concept can be applied to the increasingly popular practice of partner yoga which has different styles of its own such as acroyoga. San Diego-based instructor Abby Vernon says that it really helps couples connect physically and on a deeper level. In this style, two people can embody the primary goal of yoga which is union. Both bodies need to touch and communicate in order to be in sync. Foxy Bingo recommends massaging each other as well, which you can do after each class as a way to strengthen the bond even more. Think of it as a trust-building exercise where you surrender yourself to your partner and let them attend to your needs. In partner yoga, you have to employ the same trust especially in weight-bearing poses.

Lastly, remember that navel-gazing has other connotations, too. One of those is about the subtle body or the nadis where the energy flows. Patanjali was also speaking of navel-gazing as a mode of introspection in which you try to quiet the mind, rid it of unnecessary thoughts, and reach a place of calmness.