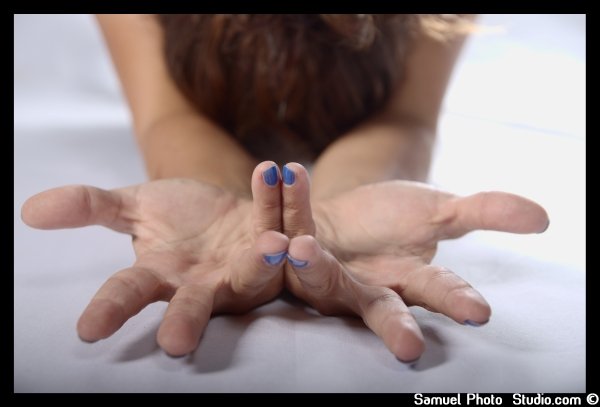 My article published in Elephant Journal/Oct 2012

How Yoga Awakened the Teacher in Me

Sharing my battle from escapism to truth: the naked truth

After leafing through so many yoga teachers’ bios, it dawned on me that where they’ve been and who they’ve trained with served little purpose. Those teachers who actually got down to the nitty gritty about how yoga stepped into their lives, what lead them there, is what really resonated with me…

My parents both passed away when I was seven; it was traumatic and it wasn’t an accident. My father was very mentally unwell all of his life and one day decided he couldn’t live with or without my mother. A tragic love story.

For years I’d thought it was just a bad dream; every morning I’d wake up and think they would be there. I learned at a young age that nothing is forever.

Kids at school were asking lots of questions. The truth was just too intense to share, so I fed them lots of lies. This ‘lying’ continued throughout my life because the real story was too intense. I also found the more I talked about it the more it took me back to that time and it wasn’t really a place I wanted to go back to.

So I buried it.

For years after their death I felt like I was walking around in a bubble; it just felt so surreal that they weren’t around anymore. My brother was 18 at the time and became my legal guardian; a huge responsibility for someone so young but he was amazing. Funnily enough I think my childhood was more privileged than my siblings’; I had much more freedom with such a young caregiver, and in the first few years there was more peace in our home.

I also had a strong sense for others who were suffering; I always was and still am referred to as the ‘sensitive’ one in the family. This empathy gave me the desire to want to help others in my later years, which though I didn’t realize at the time, helped me too.

So from a young age I learned that everything can be gone in just a ‘snap!’ I embraced the idea of ‘live everyday as if it were your last’ with a vengeance. I tended to spend time with those who felt good to be around as much as possible— just in case it would all be over tomorrow. That can be a little overwheming for some people.

I learned to forgive fast and fell head over heels in love often and still do! Then I find I’m over it all even faster.

I wanted to experience everything I could. Some antics were healthy; others not so much.

I was living on my own at a young age attending University but also working in Toronto’s downtown bar scene. It was there that I was introduced to a lot of the ‘underground’ parties. Initially I felt free from years of buried questions and emotions. Then later on it became a form of escapism. I felt like a victim; an attitude which gets you nowhere but down.

I landed in the world of drugs and alcohol and everything came up; I was like a volcano spewing out all that lava, and it felt great! I had a new found freedom—I indulged more to let out more. I danced, wrote, painted, it was endless. (N.B. In my familia we were raised to keep our ‘voice’ hushed. Bury everything—the good ol’ Catholic way *cringe*).

It felt like all of these antics were helping me to unearth everything I had buried deep down, but not in a progressive way.

Now don’t get me wrong, I’m not promoting taking drugs. There are healthier ways to ‘open up’. This was just the path that I chose to take. Every Up has it’s Down.

Be it right or wrong, good or bad I can see the benefit of it all, as well as the downslide. Certainly this lifestyle isn’t one you can live for long without some repercussions.

Fast forward to my 30th birthday. Wham bam! I decided it was time for a lifestyle change. I found myself wondering where I was going in life; I had no direction, no answers and it terrified me! So I stopped everything all at once: bye bye drugs & alcohol, so long nightclubs and parties.

My body went into shock; all of a sudden I wasn’t feeding my body what it was used to getting. I fell into a deep depression for six months; it was the scariest place I’ve ever been. I often pondered ending my life and would hope for my mattress to just swallow me up. I  would imagine standing on the edge of a cliff, knowing I wouldn’t have the courage to jump, but also knowing that if someone was willing to push me, I would consider it.

Initially the doctor put me on antidepressants which just made everything feel worse; I felt foggier and just dreadful. I was in such a deep dark hole that for months I couldn’t see even a twinkle of light. I knew I couldn’t take these pills any longer. I remember secretly flushing them down the toilet—I would not let them be the end of me.

Then I found a natural healer and this was the beginning of my journey to healing. It was through natural therapies that she began to try and unblock me—and she said I had many blockages. I remember her punching me hard in the chest just to get some reaction out of me, I was completely numb. She did su jok on certain pressure points, acupuncture and reiki; they were helping a bit, but not enough. At this stage, chocolate made me feel the best; it became my new addiction, hence gaining ten kilos and feeling even more crappy about myself…

But it was all part of the ride.

So a friend suggested trying yoga. I was always into fitness, but yoga? Whateverrrrrr. I thought it was a lame excuse for doing exercise. I was thee biggest yoga skeptic. All the same I decided to give it a go. Once I found my teacher there was no turning back. It really did help me let go of everything that was wrong for me. It taught me a gradual process to healing. I learned to let go of things one at a time instead of kicking it all out in one go.

I even remember going into a few morning yoga classes after heavy nights of partying. My teacher was open enough to know what I needed. I felt so horrible during class. Dizzy, nauseous and then light as a feather afterward. So much so that I didn’t want to go partying on the nights before yoga so I could get higher in class, naturally.

It helped me connect with feelings that I had buried deep down and long ago in a safe way, through awareness. I started journaling again.

Yoga became my new thing. I hit as many classes as I could. My diet started getting healthier and I was more gentle with my body & mind. I started losing weight and feeling great! It really happened so much faster than any other type of healing I’d tried. My body & mind responded so quickly to it. I stopped smoking cigarettes and marijuana.

Then I travelled and bumped into old friends with old habits; I caved.

Yoga was still in my life but I got back into smoking marijuana and hashish on a daily basis. I was chronic. I’d wake to a joint for breakfast and smoke them like cigarettes throughout the day. I always believed I would never quit; I didn’t want to. I couldn’t imagine hanging out with people who didn’t smoke.

Gradually over the years, it came to a point where the more yoga I did the less I smoked. I met different people who didn’t smoke and that made it an easier transition. It all happened so naturally, where at one stage I was smoking chronically, then once per week, then once per month, then perhaps once every 6 months. Then none. This was a four year transition.

Yoga taught me that it is completely natural to have your ‘setbacks’ and to not get hung up on them. I got back on the right track. What’s the other option..giving up?

The time had finally come for me to let go completely. Not feeling the need for anything ( but yoga) was one of the most freeing feelings ever!

So this is how yoga came into my life and how it has helped me. It awakened the teacher in me. It’s made me want to pass yoga on soooo badly to others, but I hold back cause I remember how much I despised having anything pushed on me. I hope that perhaps this will help any of you with similar issues.

Peace: the ongoing journey within.